After building her own DIY “artificial pancreas,” Dana Lewis helped found the open source artificial pancreas movement (known as “OpenAPS”), making safe and effective artificial pancreas technology available (sooner) for people with diabetes around the world. She’s working to scale patient-led innovation and scientific discovery in more patient communities, and is the Principal Investigator of the Opening Pathways project.

A story and a few examples about the different perspectives we all have in healthcare.

A few weeks ago, I was pushing my nephew on a swing at the playground. Another little girl also toddled over behind him, and asked her dad to lift her up at the same time I was setting my nephew into the swing. We adults both started pushing the swings gently. “Daddy, he’s going backward!” the little girl said – because I happened to have placed my nephew in the swing in the opposite direction.

“Oh, but maybe you’re the one swinging backward!” I joked. “He thinks he’s going forward.”

The dad said “Yes, it’s all in the perspective.”

I am relaying this story because of one theme that’s been circling around our team discussions for quite some time. Namely, the different perspectives that patients have compared to those traditionally working as professionals in the healthcare space (e.g. traditional researchers or clinicians, etc.). Our team has realized most of the time that thorny discussions greatly benefit from recognizing the different perspectives and framings involved for the individuals in a situation. At the surface level, it might appear that these views are “opposing.” But with most of our discussions, what we’ve found is they’re just different. By different, we mean that there are good reasons and goals in each perspective and that, often, the right answer involves working through the tension between these two “good” things. And recognizing the difference often is enough to allow individuals to meaningfully listen to one another, think through why someone else’s perspective has value, and find ways to work through the tensions that emerge from different needs. This creates the space for solutions to problems to form rather than talking past one another. 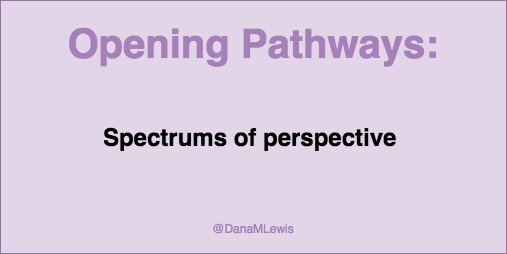 Here are some of the examples of differing perspectives we’ve noticed :

Many of these have been well-articulated by Eric (Hekler), especially in recognizing the perspective of traditional researchers, when we’ve discussed the DIY/patient perspective. I’ve been blown away by his ability to stop and crystallize the distinction in perspectives, and to help me better understand these perspectives that differ from mine and how they impact our research.

It may be uncomfortable to read those; or you may read those and think that, based on your background and experiences, one column or one set of perspectives resonates more with you than the other. We all will have that type of reaction. But I think it’s important to pause and recognize first that each of these perspectives and reactions have developed for a reason.

For patients, many of these have developed out of necessity. Patients have real conditions and many needs that are not being addressed (or fast enough, or well enough).

For traditional researchers, many of these evolved out of a system that was built up to support and facilitate research as a profession, in the pursuit of generalized knowledge. Traditional researchers have succeeded with these perspectives for producing generalizable knowledge, though they are increasingly being asked to think not only about generalized insights but to also create solutions that work in context.

I also recognize that sometimes the instincts of protecting one’s self (super strong) and protecting one’s career/way of life (also a super strong instinct) can clash – because these are both strong, those sometimes can become the forefront of a discussion. (Being told not to do something that is saving your life or drastically improving your quality of life is not something one likes to hear; similarly, being told you’re doing your professional work wrong is not something one likes to hear, either. I’ve gotten to hear both. I have been told not to do OpenAPS, which drastically improves my quality of life and long-term outcomes with diabetes. Similarly, as a researcher, I have been told that my work is not valid until/unless I have a PhD.)

Setting those aside – or acknowledging them as part of framing the discussion – allows us to understand each other’s perspectives and methods, plus evaluate if one is fairly or unfairly overpowering the other, and if so, what to do to address that.

And as always, please consider the door open to discussion on this topic and others from our research efforts – if there’s a question you have about this type or perspective on work, please feel free to reach out privately or via the comments or social media! We may not (and usually do not) have answers, but our entire team is open to continuing to ask the hard questions and start to frame new avenues for future exploration.

When you log into World of Warcraft or any other role-playing video game, your first job or prompt is not to slay the dragon. You are given tasks appropriate to your skill level, which in the beginning may be exploring the village, collecting points by talking to the local farmers, or any other c...